theoretic actions, actions with theoretical (as opposed to practical) goals Interactive coin addition: How hands can help us think

Abstract:  Does using our hands help us to add the value of a set of coins? END_OF_DOCUMENT_TOKEN_TO_BE_REPLACED Abstract:  Taking a lead from existing typologies of actions in the philosophical and cognitive science literatures, we present a novel taxonomy of actions.  END_OF_DOCUMENT_TOKEN_TO_BE_REPLACED 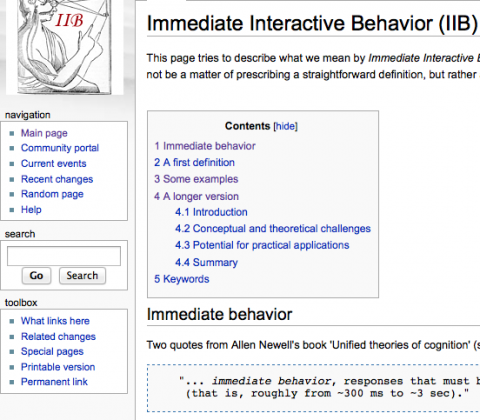 Summary:  We rarely solve problems in our head alone. Instead, most real-world problem solving and routine behavior recruits external resources and achieves its goals through an intricate process of interaction with the physical environment.  Immediate interactive behavior (IIB) entails all adaptive activities of agents that routinely and dynamically use their embodied and environmentally embedded nature to augment cognitive processes. IIB also characterizes an emerging domain of cognitive science research that studies how cognitive agents exploit and alter their task-environments in real-time. Examples of IIB include arranging coins when adding their values, solving a problem with paper and pencil, arranging tools and ingredients while preparing a meal, programming a VCR, and flying an airplane. END_OF_DOCUMENT_TOKEN_TO_BE_REPLACED Abstract:  This article explores the concept of epistemic actions in the Tower of Hanoi (ToH) problem. Epistemic actions (Kirsh & Maglio, 1994) are actions that do not traverse the problem space toward the goal but facilitate subsequent problem solving by changing the actor’s cognitive state.  We report an experiment in which people repeatedly solve ToH tasks.  An instructional manipulation asked participants to minimize moves either trial by trial or only on the last three of six trials.  This manipulation did not have the predicted effect on the trial-by-trial move counts.  A second, device manipulation provided some participants with an “exploratory mode” in which move sequences could be tried then undone without affecting the criterion move count.  Participants effectively used this mode to reduce moves on each trial, but there was no clear evidence that they used it to learn about the problem across trials.  We conclude that there is strong evidence for one sub-type of epistemic action (acting-to-plan) but no evidence for a second sub-type (acting-to-learn). END_OF_DOCUMENT_TOKEN_TO_BE_REPLACED