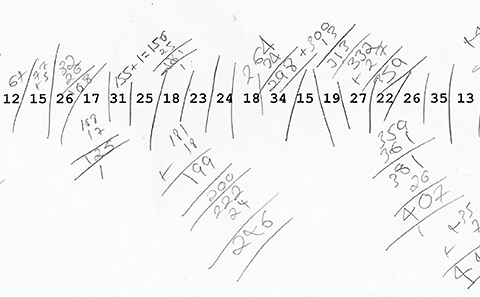 Abstract:  Successful problem solving depends on a dynamic interplay of resources between agent, task, and task environment. To illuminate these interactions we studied how participants added a series of single-digit numbers presented on a computer screen. We distinguished between four different user interfaces, each implementing a different mode of interaction with the displayed addends: look only, point, mark, and move. By collecting and analysing complete interaction protocols we were able to integrate overall performance measures with fine-grained behavioural process data on the strategies engendered by the different user interfaces. We discovered reliable differences in the chosen sequences of addends, which can be understood in terms of the cost-benefit structures provided by the interactive resources of the user interfaces.