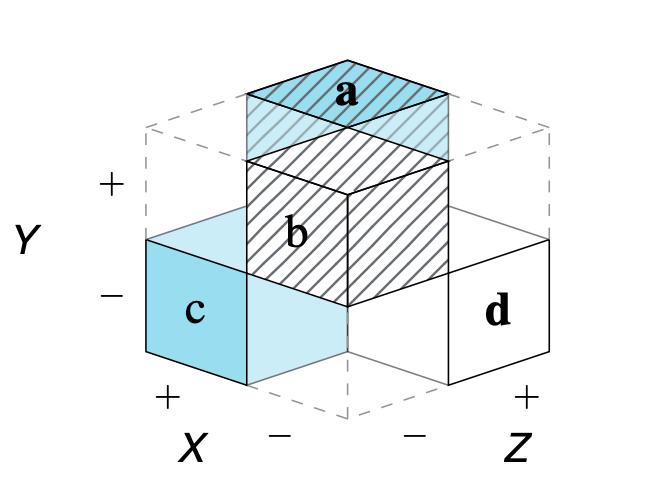 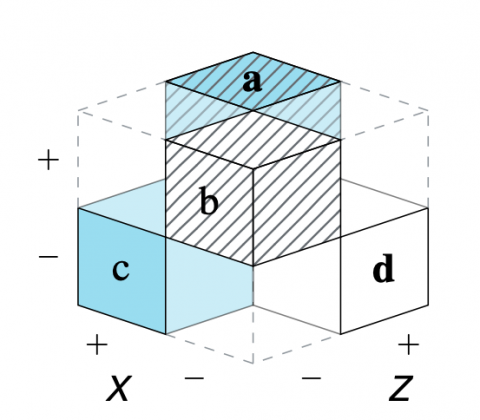 Paper: Perspectives on the 2×2 Matrix

Perspectives on the 2×2 matrix: Solving semantically distinct problems based on a shared structure of binary contingencies

Cognition is both empowered and limited by representations.  The matrix lens model explicates tasks that are based on frequency counts, conditional probabilities, and binary contingencies in a general fashion. Based on a structural analysis of such perspective on representational accounts of cognition that recognizes representational isomorphs as opportunities, rather than as problems.
The shared structural construct of a 2×2 matrix supports a set of generic tasks and semantic mappings that provide a tasks, the model links several problems and semantic domains and provides a new unifying framework for understanding problems and defining scientific measures.  Our model’s key explanatory mechanism is the adoption of particular perspectives on a 2×2 matrix that categorizes the frequency counts of cases by some condition, treatment, risk, or outcome factor. By the selective steps of filtering, framing, and focusing on specific aspects, the measures used in various semantic domains negotiate distinct trade-offs between abstraction and specialization.  As a consequence, the transparent communication of such measures must explicate the perspectives encapsulated in their derivation.
To demonstrate the explanatory scope of our model, we use it to clarify theoretical debates on biases and facilitation effects in Bayesian reasoning and to integrate the scientific measures from various semantic domains within a unifying framework.  A better understanding of problem structures, representational transparency, and the role of perspectives in the scientific process yields both theoretical insights and practical applications.

Why read this paper?

This paper is quite long and covers a wide array of concepts and topics.  So what can you expect to gain from reading it?

The article introduces two abstract frameworks for analyzing problems based on binary contingencies:  A general matrix lens model (see Figure 2) and a more specific partial cube model (see Figure 5).  Together, these models explain a wide range of phenomena on the basis of adopting particular perspectives on the simple representational construct of a 2×2 matrix (aka. contingency table or confusion matrix).

The basic idea behind both models is that the 2×2 matrix acts as a lens that converts information into insight (e.g., frequency counts into scientific metrics that express conditional probabilities).  The key mechanism that explains the measures is the adoption of particular perspectives on a framed matrix. The structure and interpretation of any contingency matrix is based on semantic constraints (e.g., how its dimensions are chosen and which categories are mapped to which locations).

In our opinion, the article makes three main contributions:

Apart from these main contributions, the paper makes some additional points:

As you can see, the range of tasks and problems discussed in this paper really is quite wide. However, the sweeping over a variety of concepts and topics makes sense when anchoring them in a shared representational construct (i.e., the 2×2 matrix).

Overall, we hope that this paper contributes to several theoretical discussions and enables new insights. But rather than taking our word for it, just check out the article for yourself. 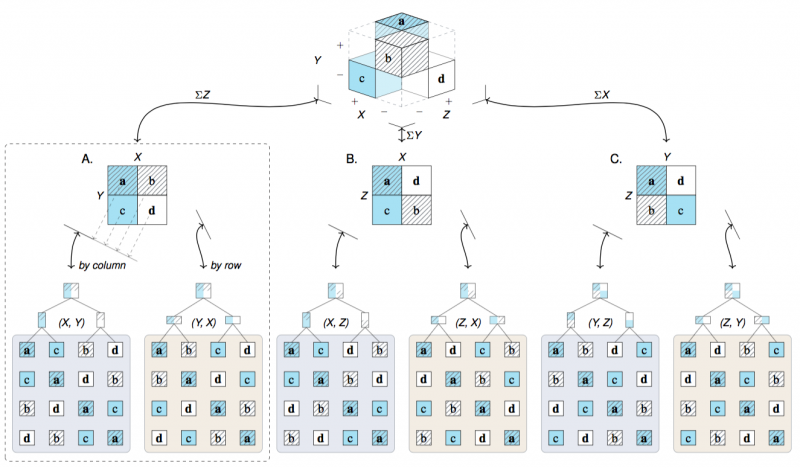 Projections of a partial cube model (from 3D) into three 2×2 matrices (2D) and six hierarchical trees or linear 1D sequences. Each level of representation supports the same 24 arrangements of the four elementary cells (see the Supplementary Material for details).